After I made my first tin can light, I decided I wanted to make another one. The first one served as great task lighting (which my husband needs) but it didn't match the other lamp that served the kitchen and living room. The first lamp was a touch lamp that has stood there for almost as long as we've been this house. The new task light was perfect for hubs but we still liked the touch lamp on its lowest setting to serve as a light for watching television etc.

When I bought the lamp for the first light, I had bought a second light since I was not sure which one I would prefer. I thought the bigger shade made out of an industrial sized tin can would work for the second stand. I drilled holes in random sizes and locations on the top (or bottom depending on your point of view) of the can. I then painted it with hammered copper spray paint to match the first lamp. When I tried it out the lamp stand, I was disappointed. It looked really goofy - the lamp was too tall.

I was frustrated and ready to call it quits when I decided to try the shade on the old touch lamp. I liked the way it looked but the hole for the finial was larger than the hole I had drilled. I didn't have a bigger drill bit so I thought I would widen the hole using the Dremel. It skidded all over the top and made a bigger hole than I needed. But wait!! I had a washer that I had (for some random reason) painted black. So I used the washer then the finial!! Success. 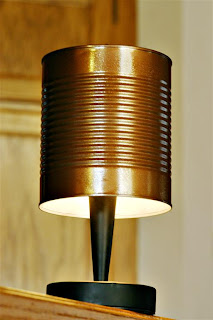 The coolest thing is how the holes send little lights all over the ceiling that look like fish scales (of course, I don't have a picture of that). 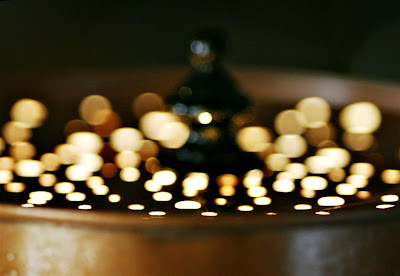 For those who might be curious, my husband has an eye disease called keratoconus which effects his vision and makes night vision and low light vision particularly difficult.

If you want to see a cool photo I took of the stitches in his eye after his cornea transplant  you can see it here.

I will be sharing this at: 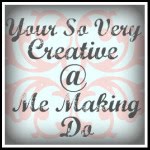