One of the suggestions for enrichment this week was weaving. Mrs. C our teacher called me and asked if I had any weaving suggestions. I told her no. The next day I got a Family Fun Magazine with a cute woven tree in it. Since then I've found the same tree on the that artist woman blog so if you want instructions I would suggest visiting her excellent instructions.

Here is C with her tree. 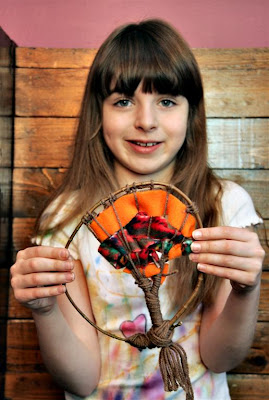 The first thing that drew me to the that artist woman blog were her adorable woven baskets using yogurt containers. Here is K with her basket. 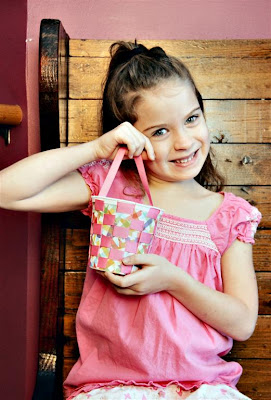 This weekend I spoke with one of my dearest friends on the planet. She homeschooled her (now grown) children and now is a homeschool examiner in Florida. She told me all about this phenomena called lapbooks. I looked them up and knew they would be perfect for my very tactile youngest and my born journaler oldest.

I put the elements of this together for K to do yesterday. I did it very quickly because I wanted to show this to the parents so they can see what the potential of this is. C is jealous and wants to do her own. Mrs. C has asked I gather elements so that the kindergartener's can do some next week. 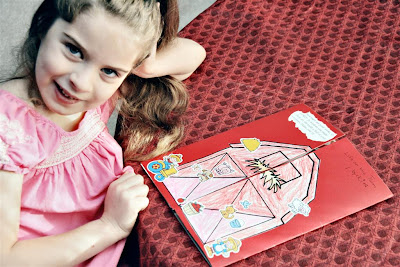 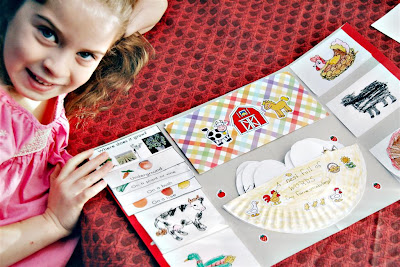 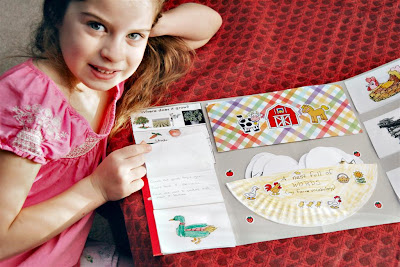 When I gather the elements for the kindergarteners I will share more about lapbooks and how I did it.

K is my tactile and kinesthetic child. Last year she absolutely struggled in kindergarten when it came to counting. I would talk to her teacher and she would tell me how they tried and tried and K couldn't do it.

I would come home and give K a jar of buttons and she was fine.

Now K is doing addition. It has been a struggle. Yesterday she was working on a work sheet where the kids are given a sum and then are give a series of six problems and they are supposed to indicate which prolbems yield the sum.

I was frustrated and so was she.

I grabbed three applesauce cups (I never throw out apple sauce cups. I have three towers of them next to the microwave and four or five in my craft room) and the marbles I keep in the living room for decoration (yes, I am odd).

I told her to count the first addend in one cup and the second addend into in another cup and then to count them as she moved them into a third cup. It worked like a charm. I was proud of myself and called to tell my husband. While I was on the phone with him, K comes up to me and tells me "Mom, this is weird. I have five plus zero. See, I have five in this cup and the other cup is empty so the answer is five."  She was excited and I was thrilled. We had not been able to get her to understand that a digit plus zero remains the digit.

The only problem is that if my highly distractable daughter looks away when counting the sum she might forget which cup is which. So yesterday I spray painted a ton of applesauce cups, with the idea that she could use two of one color for addends and the third for the sum. I did lots of cups because I figured it could be used for long addition too.

Here is K working a simple sum as an example. 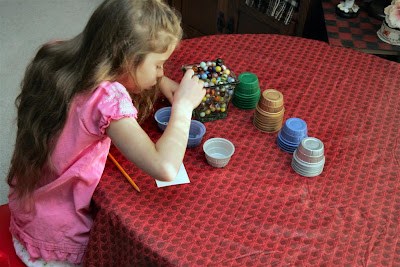 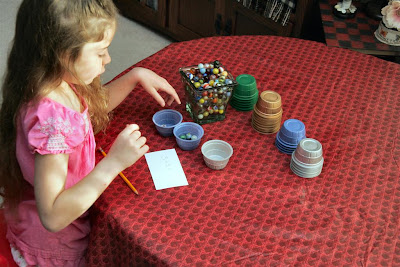 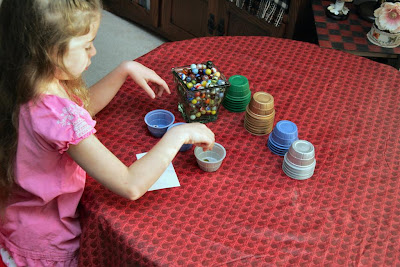 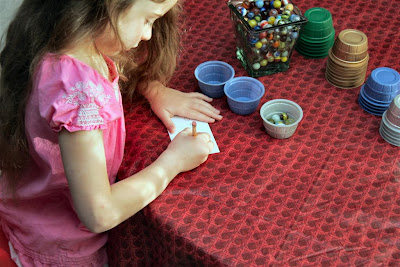